LOOK… CLOSELY AT PHOTO 1
(Don’t go to photo# 2 until you look at #1 closely..)
This is an interesting, even breathtaking couple of photos.
Be sure to read the 1st caption below picture before going to the 2nd photo.
Look closely at the first photo take your time, then scroll down very slowly. 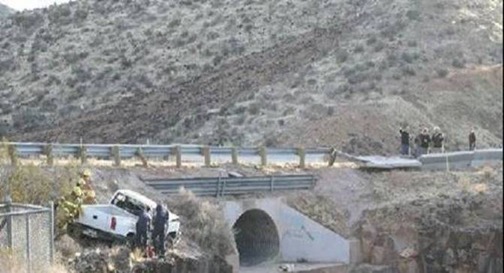 Look at the picture above and you can see where this driver
broke through the guardrail, on the right side of the culvert,
where the people are standing on the road, pointing….

The pick-up was traveling about 75 mph from right to left
when it crashed through the guardrail.

It flipped end-over-end bounced off and across the culvert outlet,
and landed right side up on the left side of the culvert,
facing the opposite direction from which the driver was traveling.

The 22-year-old driver and his 18-year-old passenger
were unhurt except for minor cuts and bruises.
Just outside Flagstaff , AZ , on U.S. Hwy 100.
Now look at the second picture below…

If you enjoyed this article please consider sharing it!

Our mission is to foster economic development and financial literacy through education, mentorship and entrepreneurship. Therefore, empowering our membership base and those with a desire to learn & think outside of the box; worldwide.
Our mission also involves Humanitarian, Religious and Philanthropic endeavors that aids charities and humanity at large.